The NASDAQ & DOW are the two key elements to determine if SPX 2406/2411 with the main driver being the NASDAQ in its final stages of its minor wave 5.  IF it should continue and push QQQ upward into the 139/140 range, SPX/SPY should make new highs in the coming days/weeks.

The DOW is trying to return upward to that 21000 level, but is very weak in the process and still hasn’t taken out its March 1 highs.  In order to keep the SPX uptrend going and reach that 2411 that is on everyone’s chart plots, the DOW has to start to outperform on a relative basis and carry the SPX with it while the NASDAQ continues rising.

Well, we’ve done just that and with the Futures rising to 2412.50 on the pop at the EU open, this rally from one week ago today has now reached 68 points from 2344; equal to roughly $6 on the SPY.  This was due to be a melt upward week without much to stand in its way and its a good time to understand what a -5% correction really means. 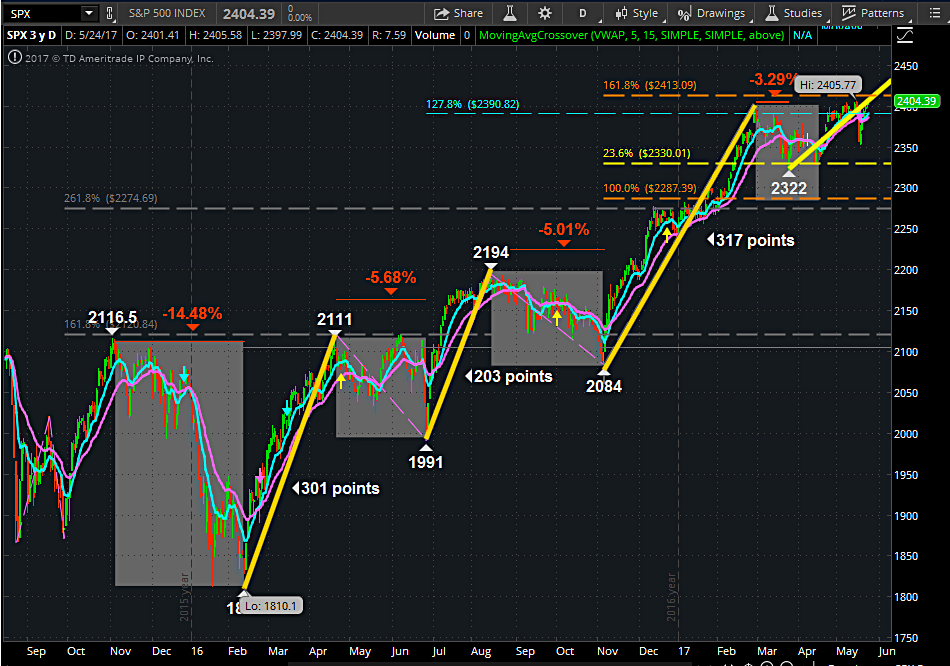 Going back to when the market was induced to a -14% crash in Aug 2015, deemed by many as the LUCY PASSPORT CRASH (you gotta watch the movie Lucy and see her Passport expiration date).  Building fibonacci extensions from that AUG – SEP move took you to the two key extensions:

The 2120.84 acted as a kyptonic hammer each and every time SPX attempted to come within 5 points of it until the JULY 2016 JOBS data report which sent us through it after two visits which were thoroughly rejected.  That again came into play ahead of the November Elections by acting as a base after that memorable SEP 9 market tanking we were so ever appreciative of being it was a Friday.

When we came into the 2274.69 area in mid December and battled with it until late January with it too acting as a kryptonic hammer for five weeks while the first 100 Days of Trump slowly picked it to pieces and has never been revisited since.  The closest we came down to it was the recent SPX 2322 which ended a -3.29% decline after the March 1 Trump Speech high 2401 printing.  That -3.29% drop was cut short of expectations and is now a focal point moving forward with this week’s rally as a deal which needs still to be completed.

Recovering form the “glitch” which created the AUG – SEP 1870 double bottom, the markets rallied up to their previous levels, well ahead of the 1st rate hike in years, to 2116.50.  As November high produced a lower December High to an even lower end of December high, the markets were already in the oil sectors gravity pull which took us down to 1810 last year February for the shortest BEAR Market in history:  8 Months.

That Tweet about a possible OPEC deal on FEB 11 @ 2:31PM began what many consider to be the beginning of a new bull market and new Elliot Wave from 1810.

Wave 2 took SPX right back up from the 1991 BREXIT lows to recapture and take out that 2120.55 two weeks later on the JULY JOBS Report, rallying for the entire month of July until a small -30 point drop at the start of August.  Two weeks later, SPX reached the then new all-time highs of 2194, chopping under it for two weeks before the September 9 fireworks session which provided for a -3.42% decline from those 2194 highs

Left incomplete, the -5.01% correction completed the Friday prior to the November Election thanks to a report/tweet by the FBI Director Comey that no criminal proceedings into the Hillary Clinton campaign would occur.

Wave 3 of 5 is typically the strongest and the Win by Trump which caught so many off guard, including trump himself, rallied from the overnight lows which were well below the SPX open lows of 2084 through November and into the December rate hike – topping out at the 261.8 fib extension (2274.69).  The then less than -2% correction into the close of 2016 chopped into that 261.8 fib extension war by using the 100% fib extension from the November Election (2287.39) as the magnet.

The brief break above to that first ever 2400 visit on March 1 was followed by a very similar pattern to the APRIL – MAY – JUNE 2016 move:  A minor 3.29% correction followed by a chop attempt top out of 2400 – 2045 until late yesterday and the overnight break upward on the Futures

Where Are We and What’s Up Above?

That 2120.84 extension mentioned was an area which had previous been broken above in 2015 and acted as strong resistance on every brief break above up until that August -14% crash.

From our November Election run up to yesterday and likely today’s higher highs, our 23.6 retracement stems at SPX 2330 and was but once visited to on that March 27 low of 2322.  It will again come into play for support when the dip arrives, but the one under it, the 38.2% retracement will ultimately be the trampoline line:   currently 2283.

To put it simply:  A -5% correction from the highs this morning on the S&P Futures would call for a return visit to 2292.50 on the Futures.

To add some fuel to the fire:  Should SPX obtain 2420 without any pullbacks (we have three-day weekend, end of May, JOBS Report and then the FOMC meeting JUN 13-14), a -5% correction would bring into play SPX 2300.

Translation:  Short the upward run in installments by buying both time and strikes whereby you don’t want to be getting SPY 230 PUTS, but rather SPY 240 PUTS and be insulated for the trip south when the birds are ready to fly there.