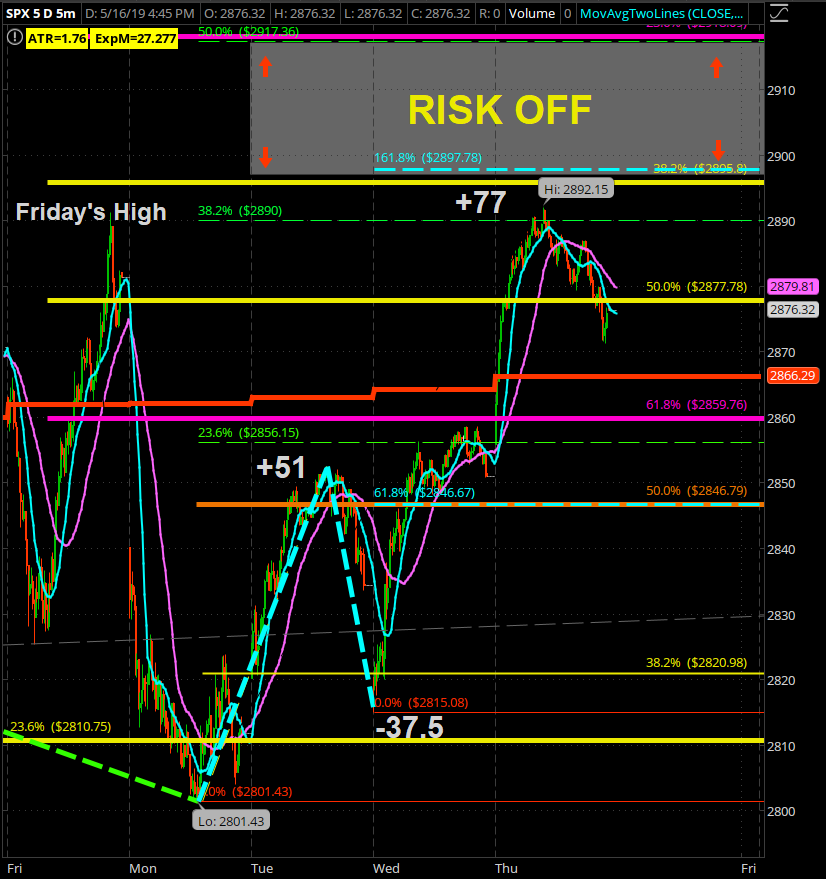 We got everything but the dip we wanted accomplished:

IS THE TOP IN?

Its OPEX week and a FAILURE was expected (i.e. not taking out the already placed High of the Month), but we have a CLEAR 3 wave counter trend move (+51,  -37.5, +77) with yesterday’s impulsive move to run out stops coming within 3p of the “Risk Off” range looking like all of the wave-b rally is complete.

Sure this can still morph upward for that range and pressure 2915 – 2920 Friday – early next week and even pressure 2931 – 2941, but I find it unlikely unless we see that dip that was expected yesterday to 2835 – 2828, but that would also be perplexing for the already bearish longer term technicals.

The BEST BEARISH SCENARIO would be for SPX to close above 2881 Friday to avoid a 2nd 🔻 RED Weekly candle.   It’s not a requirement, but just preferred as its rare to get more than 2 consecutive 🔻 RED Weekly candles and see continued selling the 3rd week, but not impossible. 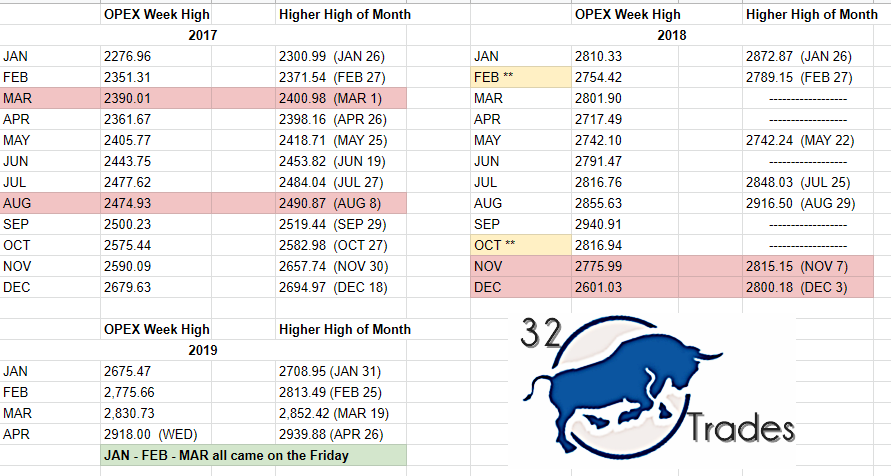 So, we’re pretty much 💯assured of an OPEX FAIL tomorrow unless a US-CHINA deal is announced as there is no other way SPX surpasses 2954 without some unicorn = leprechaun.

As we’re due a FAIL, I’m looking back at the previous 6 Failures:

FEB 2018:     SPX just dropped -11.84% to start the month off from the then ATH placement JAN 26 for the 1st CORRECTION in almost 3 years.   The FAIL OPEX week came on the Friday after a +8.75% bounce which then dipped the following week for a -2.06% drop before posting a Higher High of the Month (minus the initial drop off @ the start of the month).

DEC 2018:     High of the Month started the Month and we had a picture perfect A-B-C whereas the C ended right on the reverse view 161.8 fibonacci extension (and some extremely strong larger time frame fibonacci retracements) – RIGHT TO -20% from the ATH: 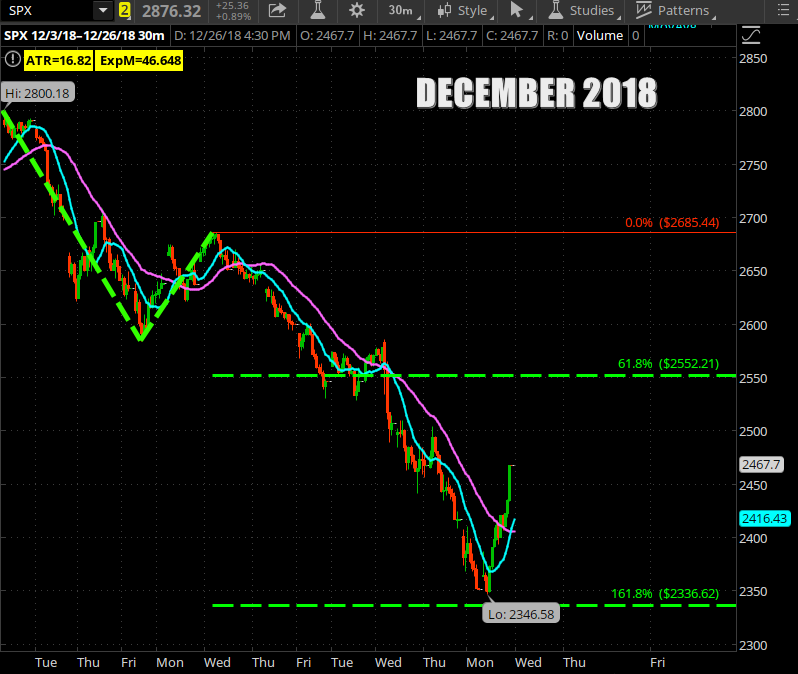 SO WHAT DOES ALL THAT MEAN?

Predicting the future AIN’T (Analyze, Interpret, Number, Target) easy, but we do it pretty darn good and we were already heading into this week with the expectations of an OPEX FAIL and preferred view swapped over to all of 2019 off the DEC LOWS having been a BIG BEARISH B wave to target the DEC LOWS or LOWER.

IF this entire move up from the DEC LOW is in fact a BIG BEAR B WAVE and we’re due to test/break the DEC LOWS to complete it, then a > -10% CORRECTION is an appropriate start as e saw in OCT. That’s NO COINCIDENCE in my Book of Reality

BEARISHLY, that ~10% dip would still be a supportive level simply because of how the algos have worked seeing 8 visits from FEB – APRIL 2018 hit and support right at that then -10% level @ 2585.

Predicting the future AIN’T (Analyze, Interpret, Number, Target) easy, but we do it pretty darn good and this is by far NOT A PERFECT SCIENCE.   However, having been inside this algo like Lawnmower Man for the last 2 years, coincidences in patterns usually come out to be results.

SPX can still morph for a higher high and pressure that 2920 – even pressuring 2931 – 2941, but the risk increases incrementally for each point above the already in 2892 OPEX High.

I got involved in MAY 24 SPY 285 PUTS yesterday using ONLY the PROFITS from the SMALL SPY CALLS plays this week as I a) am already positioned strongly for what I believed months back was a BIG BEAR B wave forming and b) to lead by example of how not to go over risked for the expected dip on the OPEX FAIL.

I also started a very small JUN 21 SPY 275 PUTS position for a BULLISH dip to ONLY the MAR – FEB LOWS which, from a math view if C = A:

It can’t be a coincidence that @fors0146 just happened to be sitting in a Starbucks in Milwaukee and SHAQ walked in.   For those new to the room, @PEEGATE and many of us have a thing whereas SPX 2729 is what we call SHAQ (the old -5% line which you cant get passed as if SHAQ was defending you).