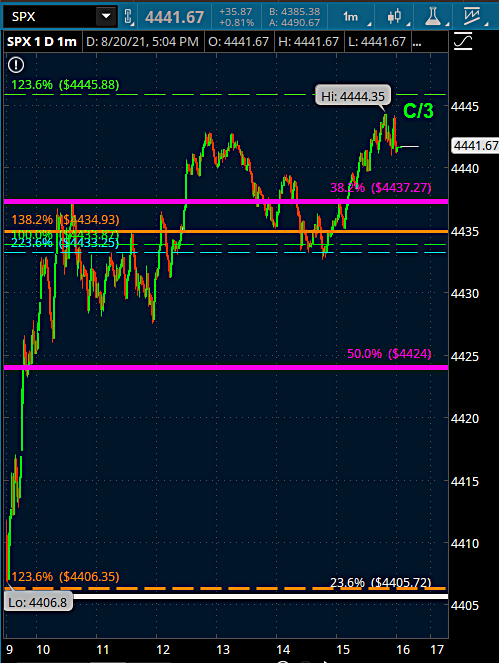 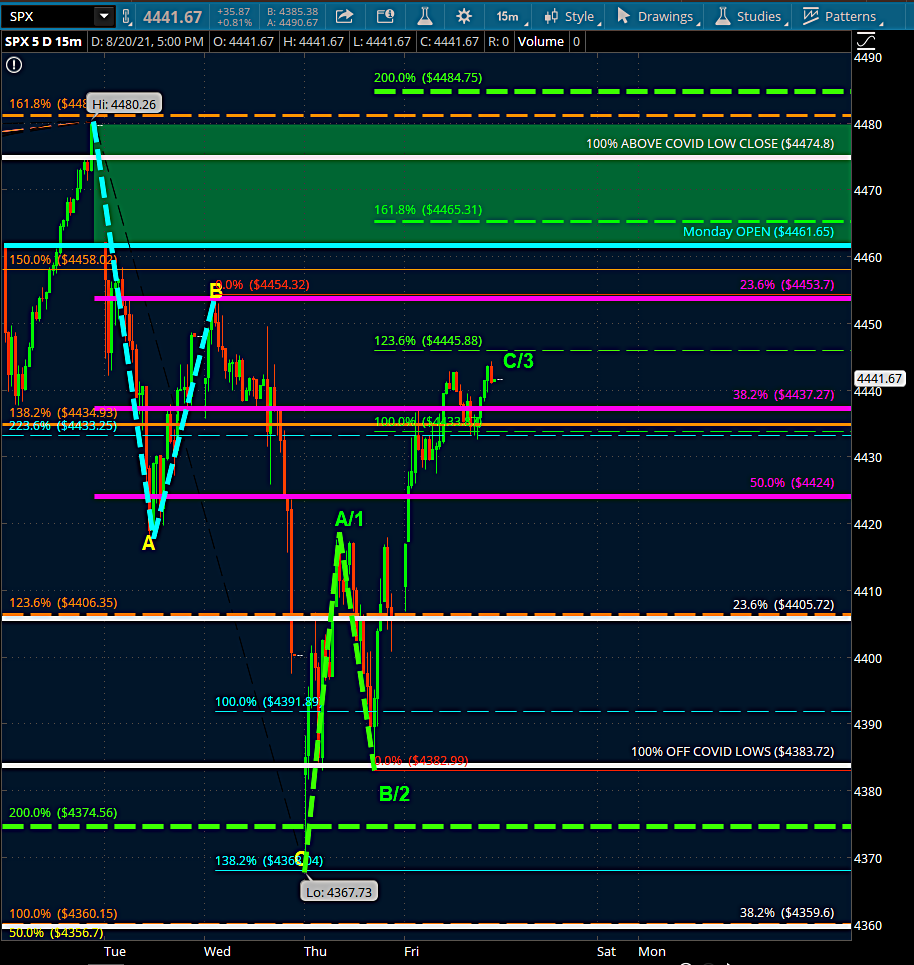 A flat correction differs from a zigzag in that the subwave sequence is 3-3-5, as shown in Figures 14 and 15. Since the first actionary wave, wave A, lacks sufficient downward force to unfold into a full five waves as it does in a zigzag, the B wave reaction seems to inherit this lack of countertrend pressure and, not surprisingly, terminates near the start of wave A. Wave C, in turn, generally terminates just slightly beyond the end of wave A rather than significantly beyond as in zigzags.

Flat corrections usually retrace less of preceding impulse waves than do zigzags. They participate in periods involving a strong larger trend and thus virtually always precede or follow extensions. The more powerful the underlying trend, the briefer the flat tends to be. Within impulses, fourth waves frequently sport flats, while second waves rarely do.

Three types of 3-3-5 corrections have been identified by differences in their overall shape. In a regular flat correction, wave B terminates about at the level of the beginning of wave A, and wave C terminates a slight bit past the end of wave A, as we have shown in Figures 14 and 15. Far more common, however, is the variety called an expanded flat, which contains a price extreme beyond that of the preceding impulse wave. In expanded flats, wave B of the 3-3-5 pattern terminates beyond the starting level of wave A, and wave C ends more substantially beyond the ending level of wave A, as shown in Figures 16 and 17.

In a rare variation on the 3-3-5 pattern, which we call a running flat, wave B terminates well beyond the beginning of wave A as in an expanded flat, but wave C fails to travel its full distance, falling short of the level at which wave A ended. There are hardly any examples of this type of correction in the price record.

A single zigzag in a bull market is a simple three-wave declining pattern labeled A-B-C and subdividing 5-3-5. The top of wave B is noticeably lower than the start of wave A, as illustrated in Figures 11 and 12.

Occasionally zigzags will occur twice, or at most, three times in succession, particularly when the first zigzag falls short of a normal target. In these cases, each zigzag is separated by an intervening “three” (labeled X), producing what is called a double zigzag (see Figure 13) or triple zigzag. The zigzags are labeled W and Y (and Z, if a triple). There are arguements that support ALL of the CYCLE is in, but we’re going to remain conservative and consider this the III topping, the IV starting and then we get V which likely goes until the mid-term elections next year or atleast into Q2 2022 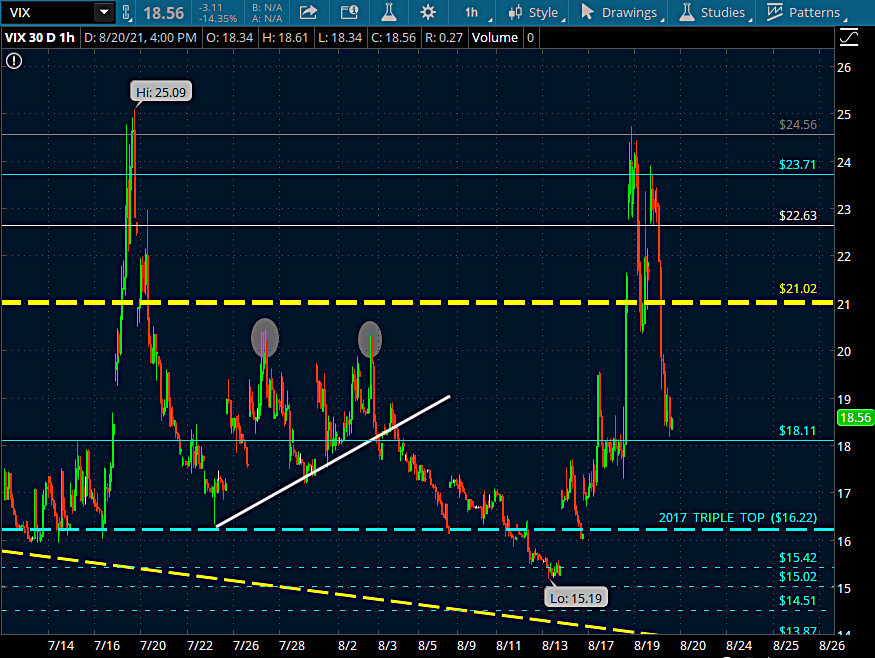 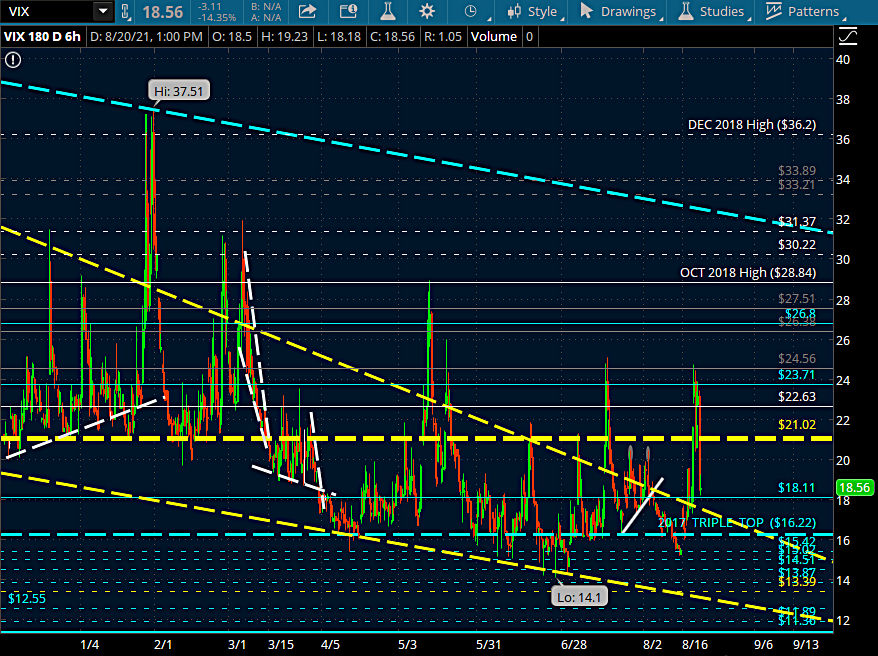 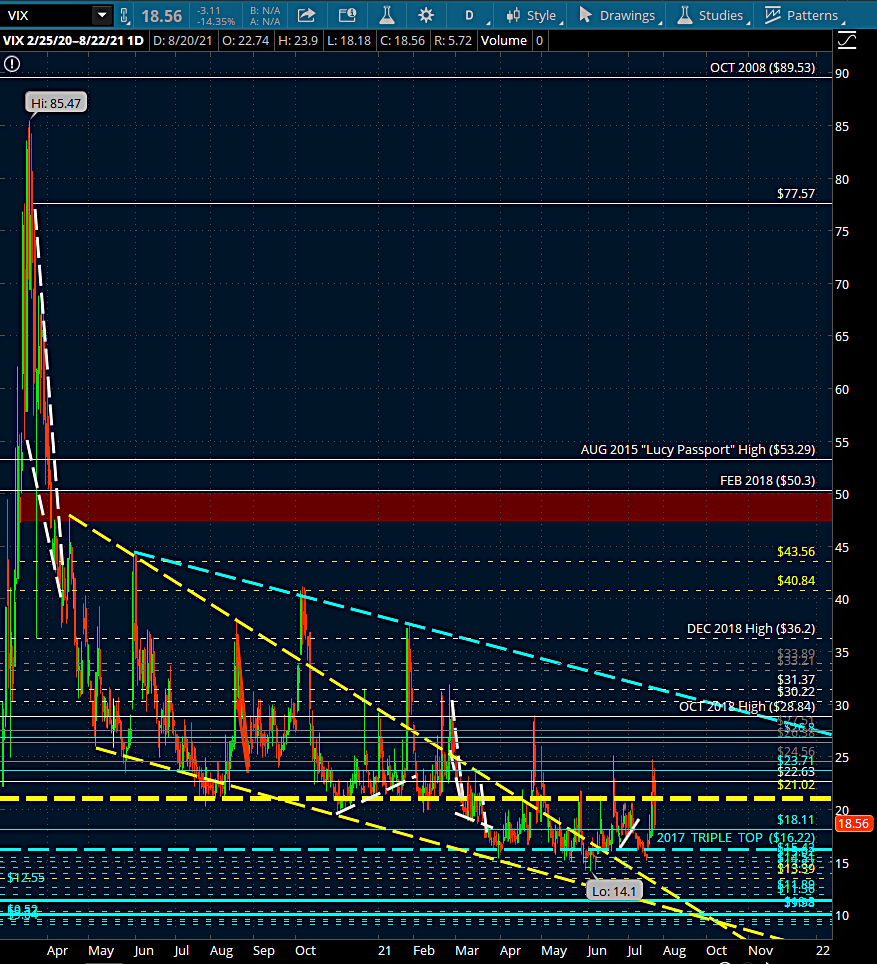 So in a quick overveiw summary:

The end of this week is Jackson Hole and Powell speaking

Jackson Holes have many times been SELL OFF COMMENTARY CATALYSTS

The RALLY Friday FAILED SPX +4458 and was done via MSFT, NVDA & NFLX 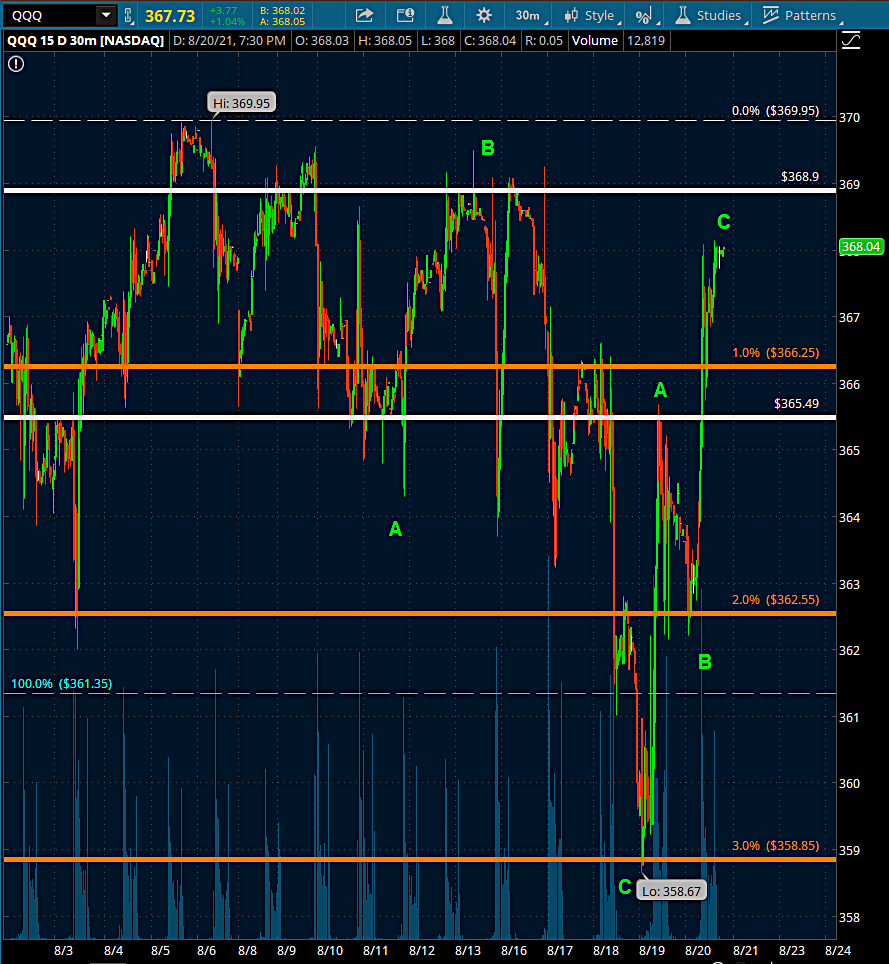 We’re FOCUSED On The OPEX PATTERN

I’ve tracked OPEX since JAN 2017 and was how I was able to warn that if we didn’t drop by Tuesday last week, it wasn’t going to happen and we’re virtually guaranteed to post hgher highs this week on SPX/SPY Going to BIDEN’s TIME only and since its most applicable being it’s where this wave began, I’m showing here the POST OPEX HIGH DIP as the TRADE FOCUS 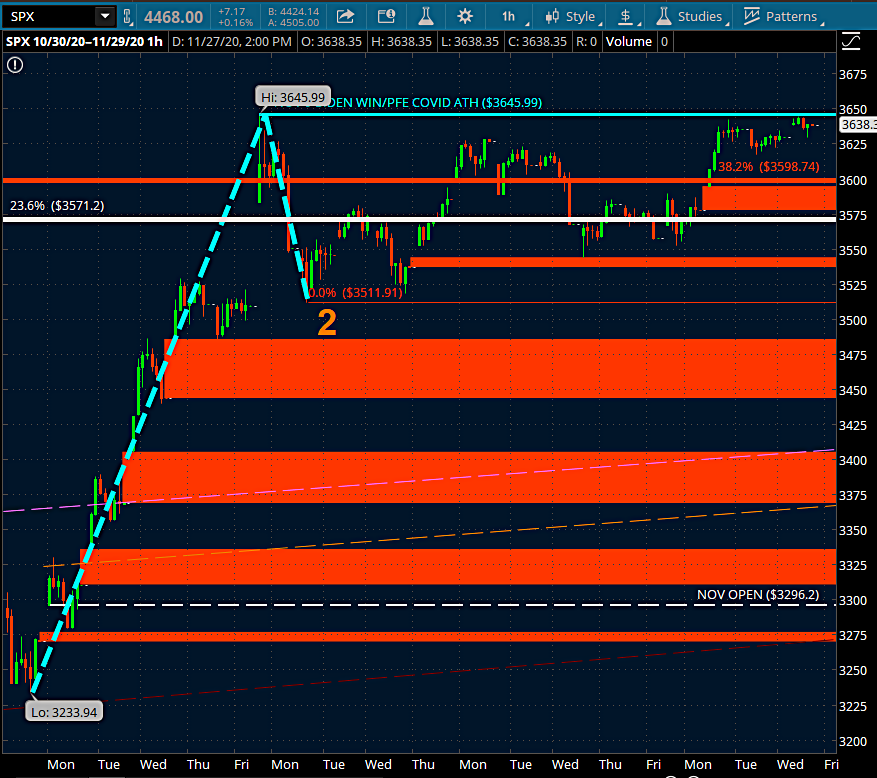 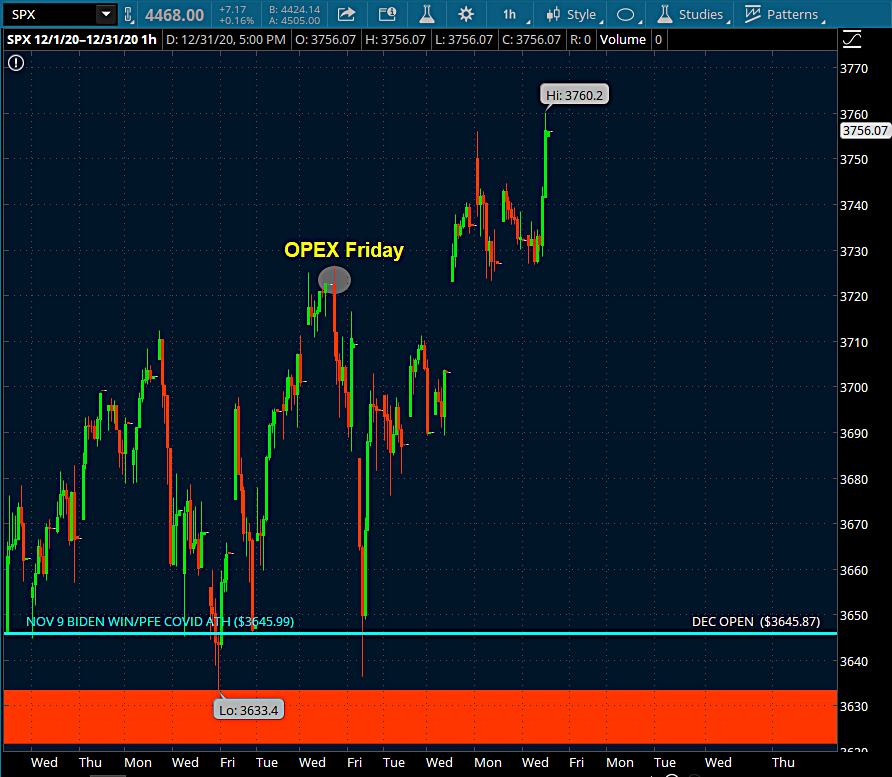 With OPEX there’s QUAD WITCHING OPEX which are those 3rd Friday’s of MAR, JUN, SEP & DEC.   Note how the DOUBLE BOTTOM SELL OFF after OPEX back to the LOW OF THE MONTH – HIGH OF NOVEMBER:

-2.42% sell off starting Friday and ending the next trading session: Monday 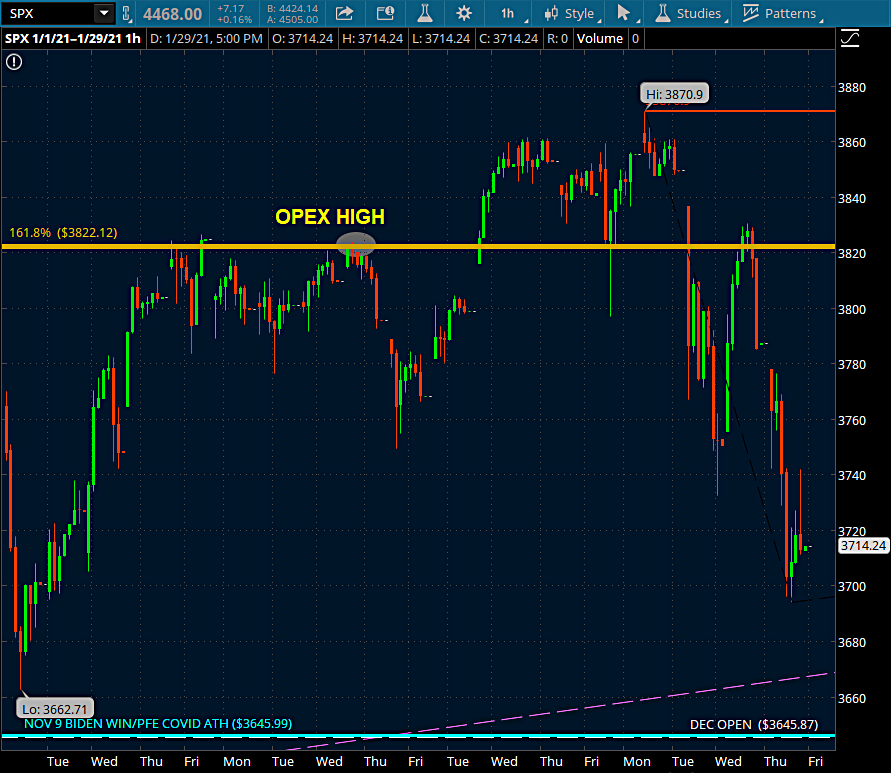 Identical to JAN 2018 with the TOP of the month coming the final Friday of the month and selling off -4.57% JAN 26 – 30, the OPEX High post on the Thursday of OEPX Week dipped -2.01% on OPEX Friday which if I recall oversold our 4hr for the BTFD OPEX High post on the Monday into what wound up being a -5.75% (the largest correction this year) correction into the MAR LOW which every elliot wave tech agrees was the wave-4 low from the OCT 30 wave start 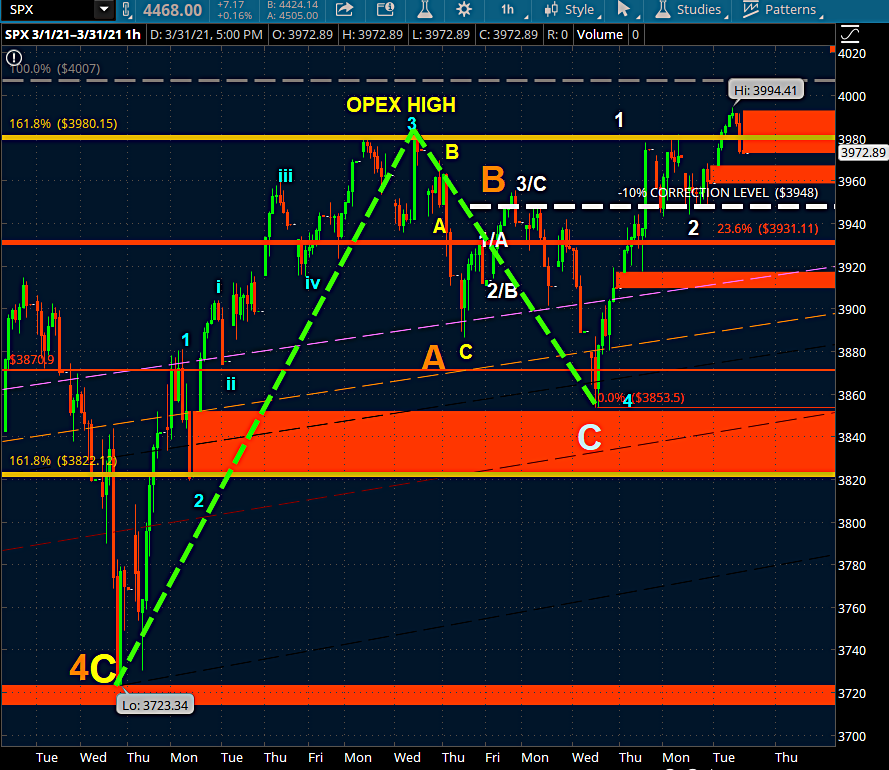 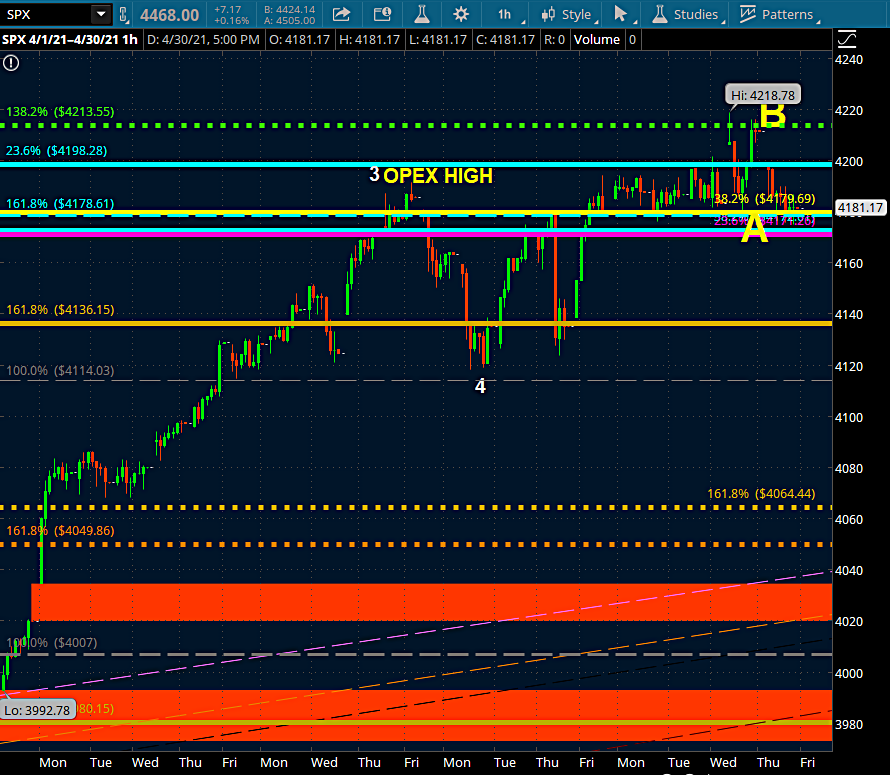 Earnings Season start month;  OPEX Patterned into the Friday with the -1.74% dip ending the Tuesday after 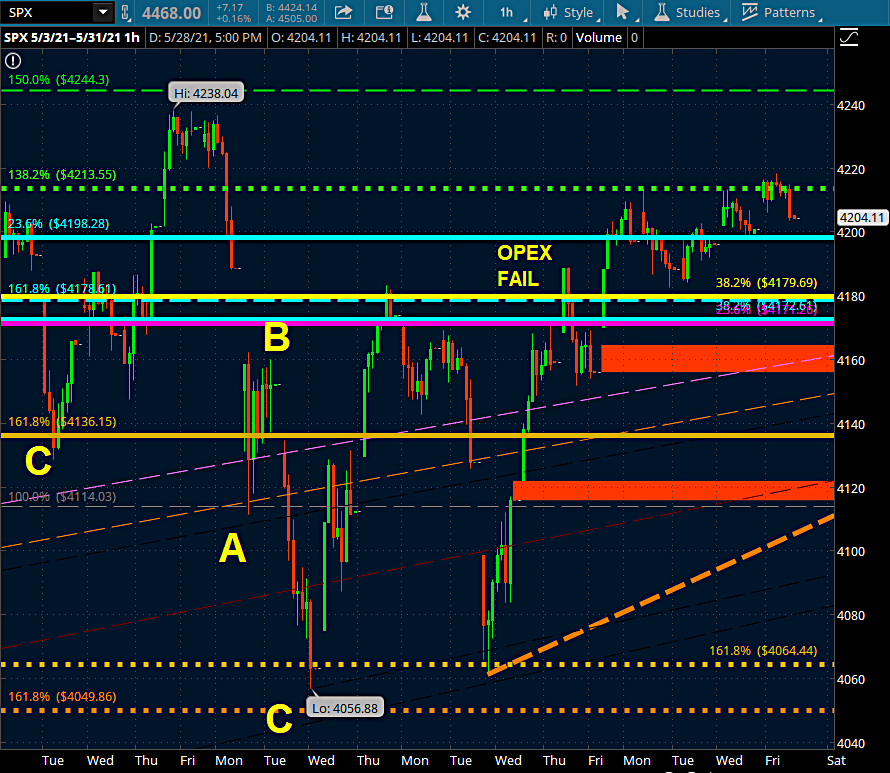 MAY FAILED by collpasing -4.27% after the MAY 10 All Time High – the latest late into the month OPEX Failure going back to JAN 2017

The DOUBLE BOTTOM BTFD during OPEX Week Failure is where the final leg of this wave-5 of wave-v of wave-III began there:   4061.41 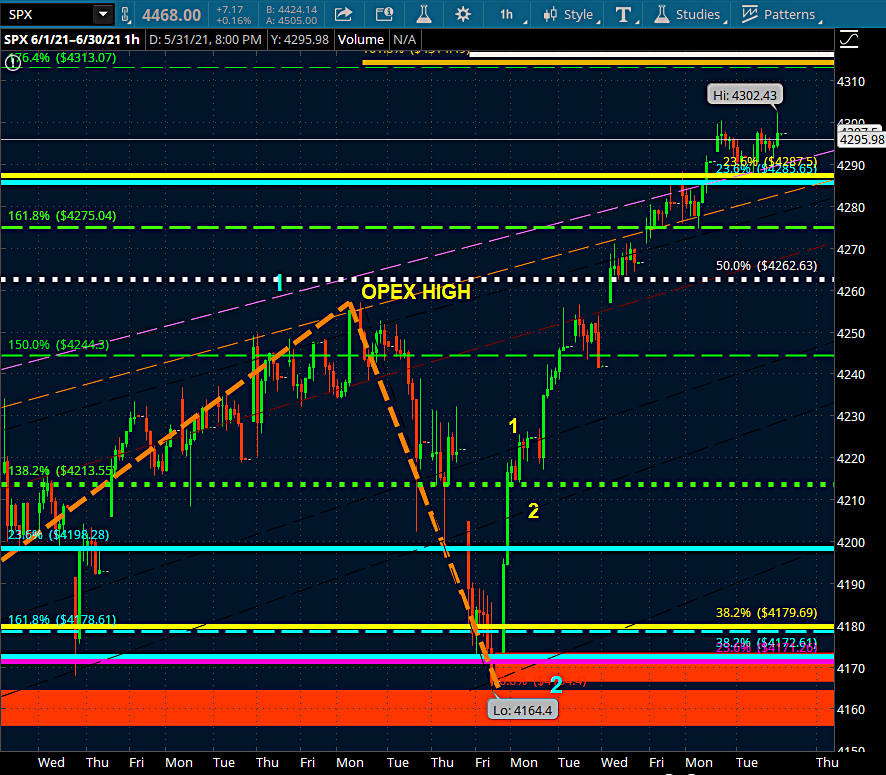 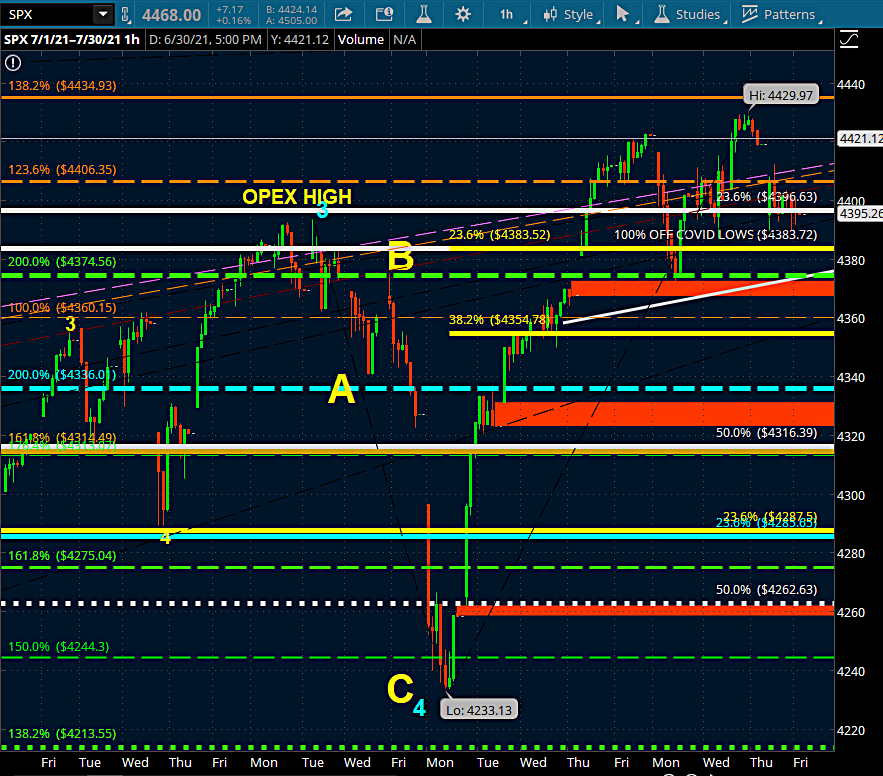 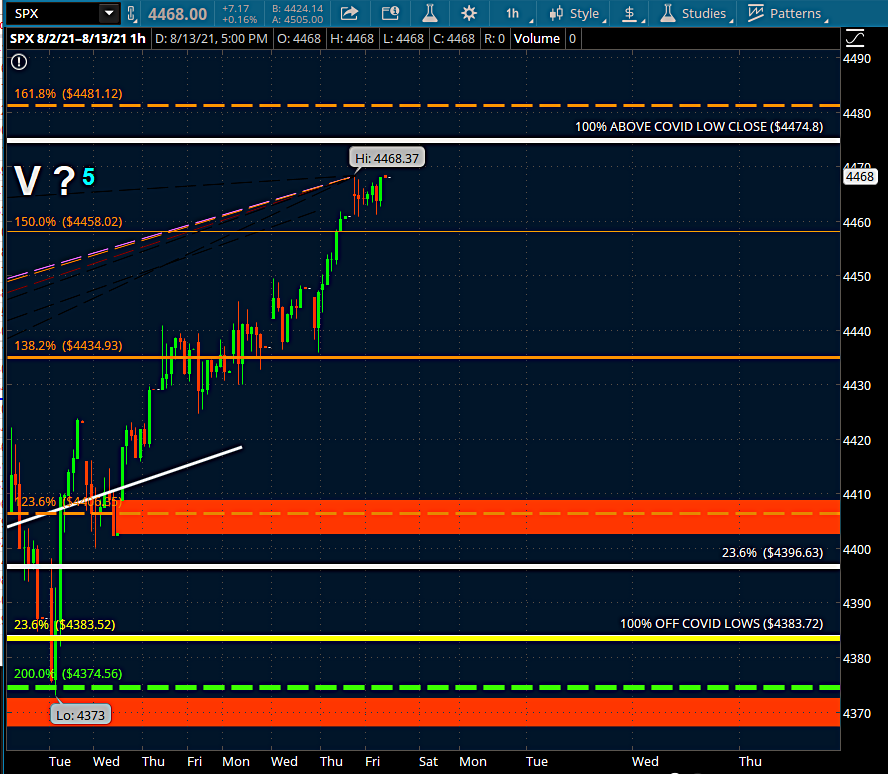 Last week SPX went 4437.77 – 4468.37 with zero energy despite how bullish that move appears and while the DOW has done more work than the Nasdaq and the Russell is wanting to confirm its wave-C to complete this 5 month long correction: 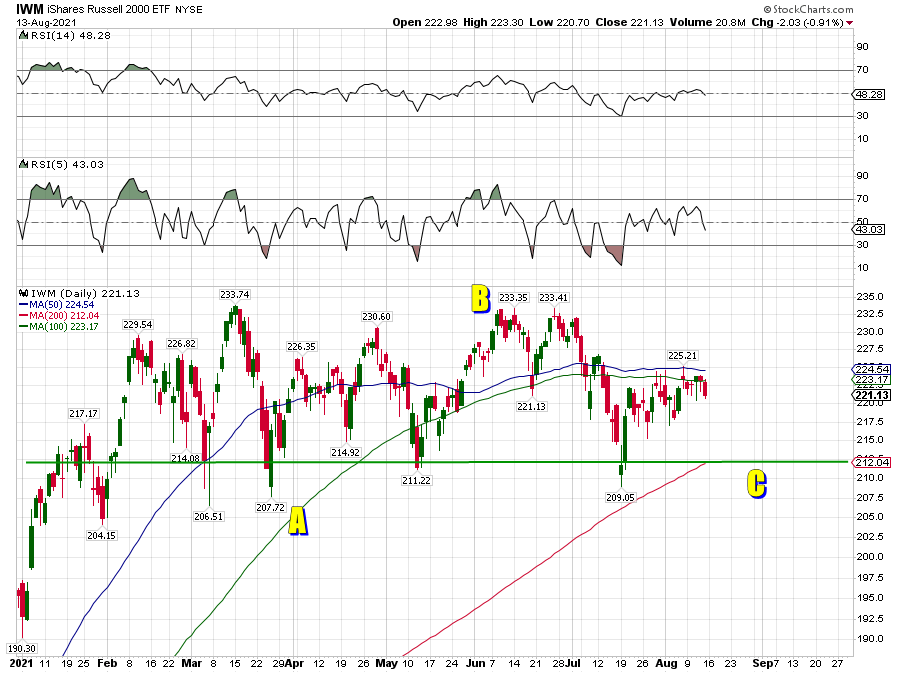 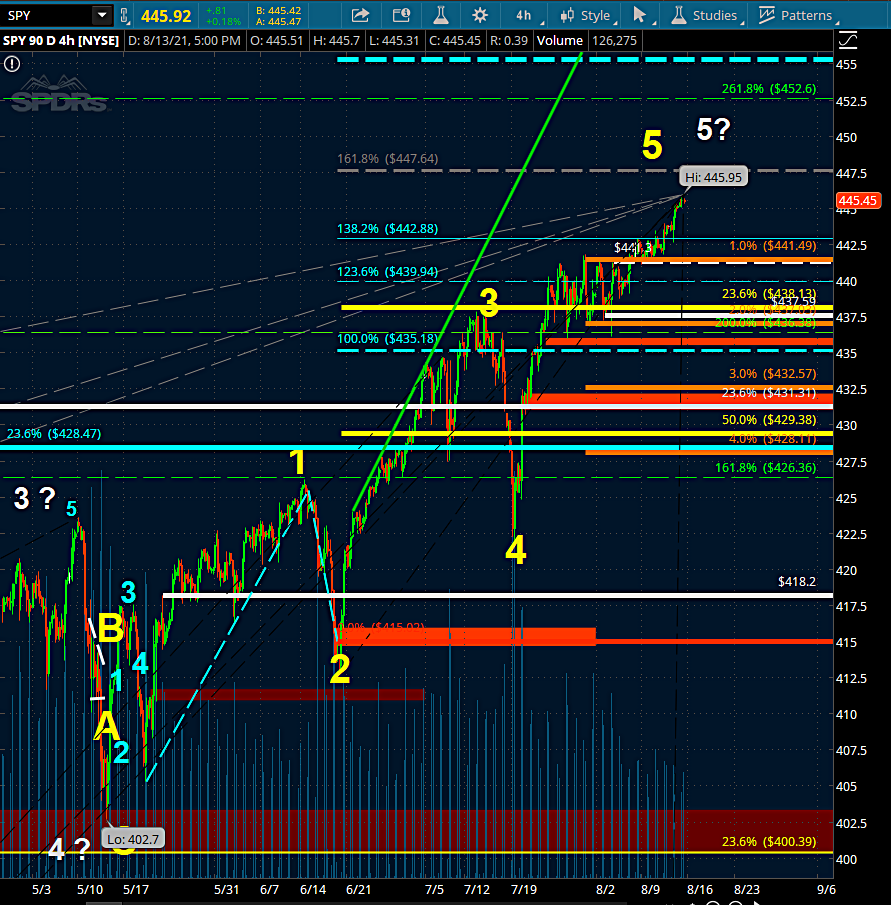