Welcome traders to the final week of the month, quarter and half year which comes with some hidden codes which are still to be revealed.  You all know how we nailed the September 9, 2016 dump day, the March 21 dump day, and recently, the June 9 Nasdaq Tech Sector dump day.  Well heading into this coming long 4th of July weekend, we have some “still to be proven” scenarios with some planetary collusion timed with them.

Before running over the patterns I’m seeing on the SPX, QQQ and IBB, here’s what’s lining up in the stars as we head into this weekend:

Come June 30, SATURN, would be aligned directly SOUTH of the earth (see here) which would be cause for a NEGATIVE DECLINATION.

How To Trade This 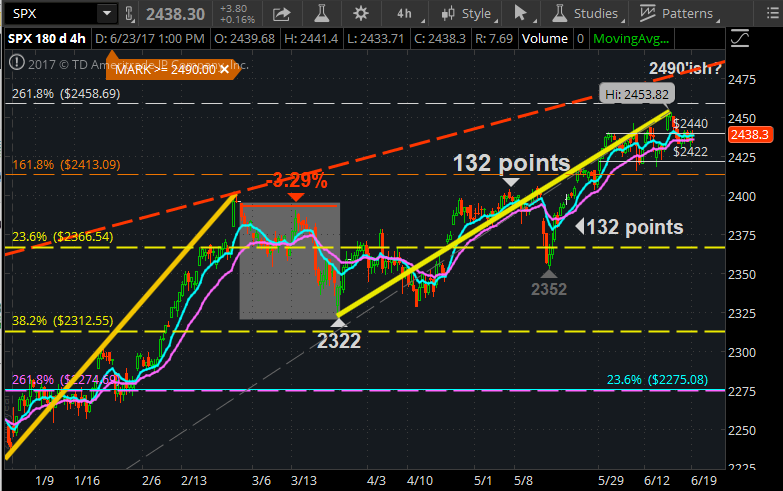 For Any Of This To Happen

SPX first needs to break below 2416/2419 and stay below it.  The day we nailed the last planet alignment trade, June 9, when the Nasdaq tech sector sold off big, SPX lows reached 2415.70, but rapidly rebounded back up above that 2422 line.

While technical indicators support the SPX 2454 uptrend high scenario we placed on Monday, there are negative divergences on the daily RSI/MACD and the weekly RSI/MACD as well.  Typically that would be enough to suggest a downtrend is underway.

Adding to this possibility is a possible end to the 7-month uptrend in the NAZ at the recent high of 6342.  As we saw on June 9, it sold off rapidly after that high and has negative divergences on both its daily and weekly RSI.  The technicals support a correction scenario is next.

What’s currently preventing this is the recent boom in the drug/biotech sector which rotated funds into what is best seen on the IBB chart.  Since the first week of January, 2016, IBB had not been able to stay at/above 302.42, yet midway through last week on whispers of the Senate’s plans to get the new Healthcare Bill voted on and passed before the 4th of July weekend (I think that’s when they said they would put it to vote) paused the possible downtrend scenario. 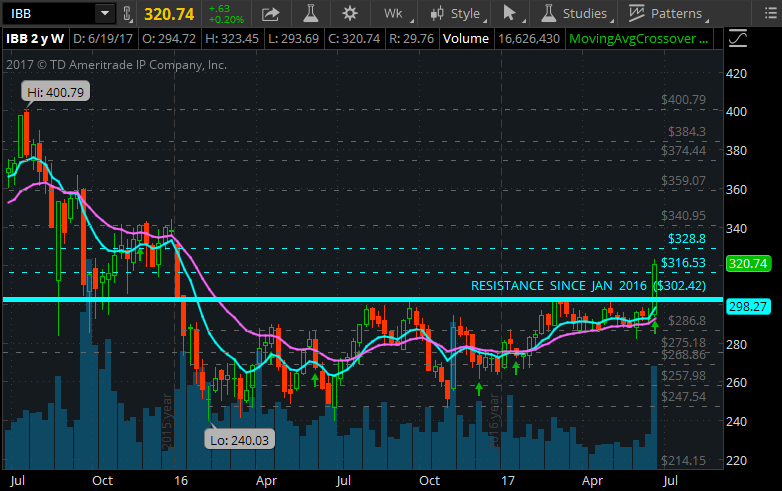 Why is June Important?

All of the dominoes truly are there lined up awaiting a push so one could either preempt this move to come by speculating into some JUL 21 SPY PUTS or await true confirmation.  In the event this all plays out as it appears to be ready to, I would not only be very conservative about upside CALLS plays into the end of the money, but also be scoping those recent bottoms my favorite stocks put in after the JUN 9 collisions of the worlds sell down and using those for the furthest away support levels:

Regardless of IF we get this pullback or not, these here should all already be ALARMS within your trading platform for when to begin looking/getting/asking about a CALLS position.