Friday was an EPIC scene in the chat room with 5Bagger, 10Bagger, even a 20Bagger in the air, up for grabs, as the focal point (Nasdaq Tech) hit almost every every one of our upper targets.

$TICK is indicating that sellers have dried up some (only two significant <-800 readings 5 minutes before the close, and nine significant  >+800 readings throughout the day) and the S&P 500 McClellan Oscillator (MO) ended Thursday at -21, up 45p compared to Wednesdaywhich, although the number of declining stocks is still more than those advancing, indicates the difference is rapidly decreasing. 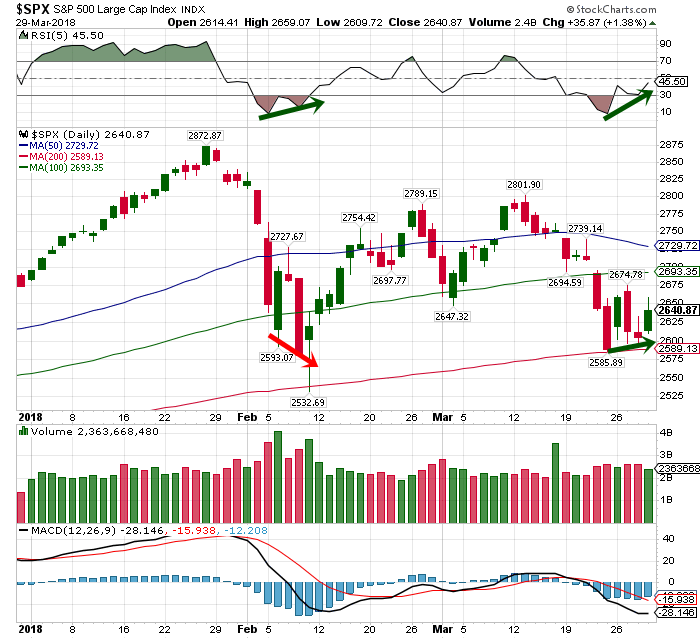 SPX teased above the 200d SMA all week and we got to see our 1st significant decline on the VIX Thursday, but it’s still above above its 20d and 50d SMAs while the SPX is, what seems like miles, a good 50 points below its 100d SMA.

All A/D lines are still in corrective mode; and not signal that the correction is over as we saw a large number of stocks hit pivotal low spots on Thursday  With market breadth improving slightly, it wants to signal the end of this correction is getting close and the RSI(5) on the SPX is trying to say we see some higher highs compared to last week as we head into Friday’sJOBS Report.

As you can see from the 2 week HOURLY chart provided from finviz for cleanliness purposes, we’ve been in a BEARISH DECLINE since MAR 13th’s 2802 high, yet, when analyzing that DAILY CANDLE BODY from the FEB 9 Lows to 2532, that 2585’ish (which also equals the -10% from ATH line) has based and looks like a “FALLING WEDGE” Pattern for now.

Our MAIN RESISTANCE ZONE takes us back to DEC 2017 with:

So Here In Lies The Problem

From an Elliot Wave POV, this MAJOR-4 is getting complex ahead of Friday’s JOBS and next week’s OPEX & start of Q1 earnings season which happens to fall on Friday, the 13th – Chapter 2018.  Once this CORRECTION MESS ends, the long-term trend is still up and that the market is still in a Bull for a MAJOR-5 capping off before the Bear market which will have to wait for the JAN HIGHS to test/break which is probably 6-12 months away.

Despite Thursday’s rally, the monthly, weekly and daily charts ALL look weak with most Technical Indicators suggesting SELL on all three time frames.  Align those signals with that view above of the SPX BIG VIEW lower support lines and one can see why the symmetry targets on all three time frames (monthly, weekly & daily) point to us seeing the FEB 9 2532 LOWS or better: 2510-2450

Of the 500 stocks on the S&P, many are currently below their RSI(14) 40% levels, but few are above their 50d &/or 200d SMA which will need to improve significantly for SPX to not break down and seek the FEB 9 LOWS or lower.

BULLS need to see SPX close above 2675 to even entertain taking a chance into Q1 Earnings off these decent, but not all the way bottomed, lows on many big names.  Bulls will then need to see SPX 2754 for them to truly get into this properly.

So Heading Into Friday’s JOBS… 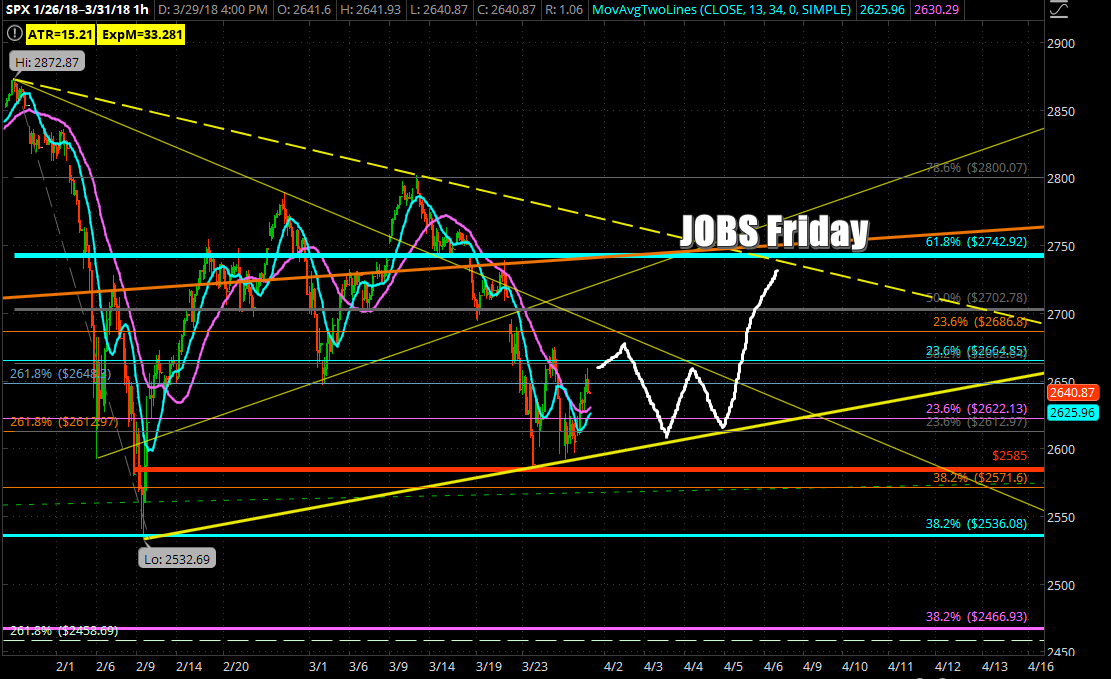 Heading into Friday’s JOBS, we continue to use the roughly +1 improving 200d SMA as if an alligator is under it and that trend line off the FEB 9 and FEB 23 LOWS to bounce off while resisting the lower of the two resistance trend lines before breaking upward on Friday and resisting the upper one and that 61.8 retrace of the CORRECTION (2743) 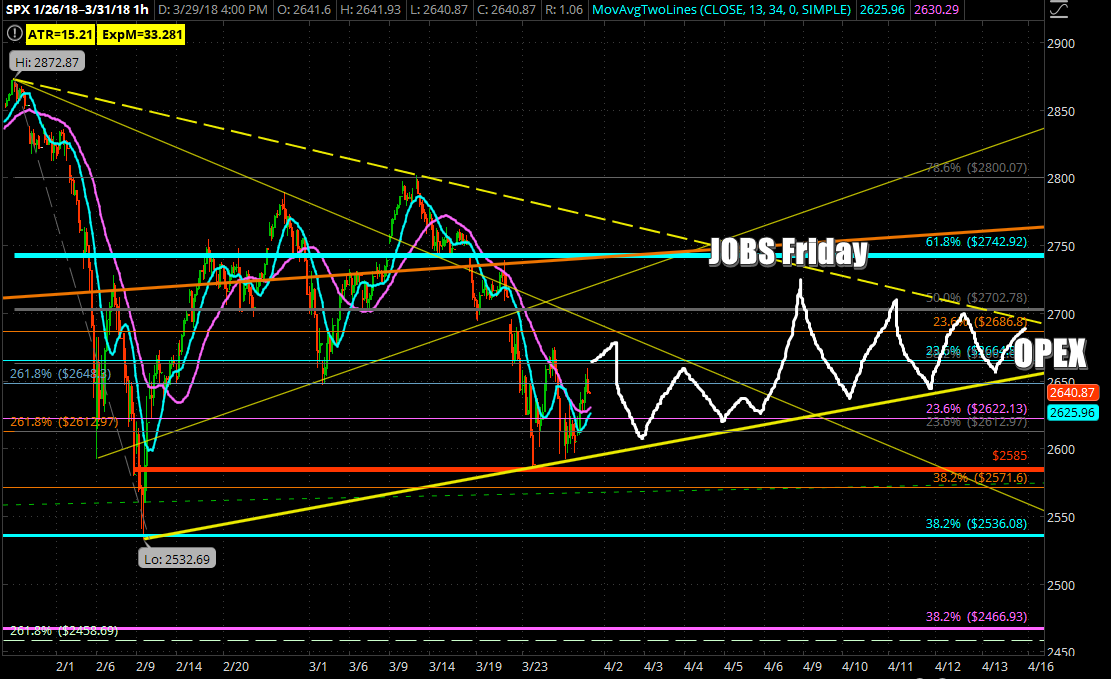 We use Scenario #1 into Friday, but then get stuck inside that same ping-pong zone between the upper resistance trend line off the highs and the lower support trend line off the lows as we head into OPEX – the start of Q1 Earnings and Friday the 13th – Chapter 2018.

If this scenario (granted its looking 2 weeks out) played, it would all but force the VIX back to that 16.22 and a break below it could offer the BULLS the confidence to make the move to end the CORRECTION as Q1 Earnings gets ready to really kick off the week of APR 20. 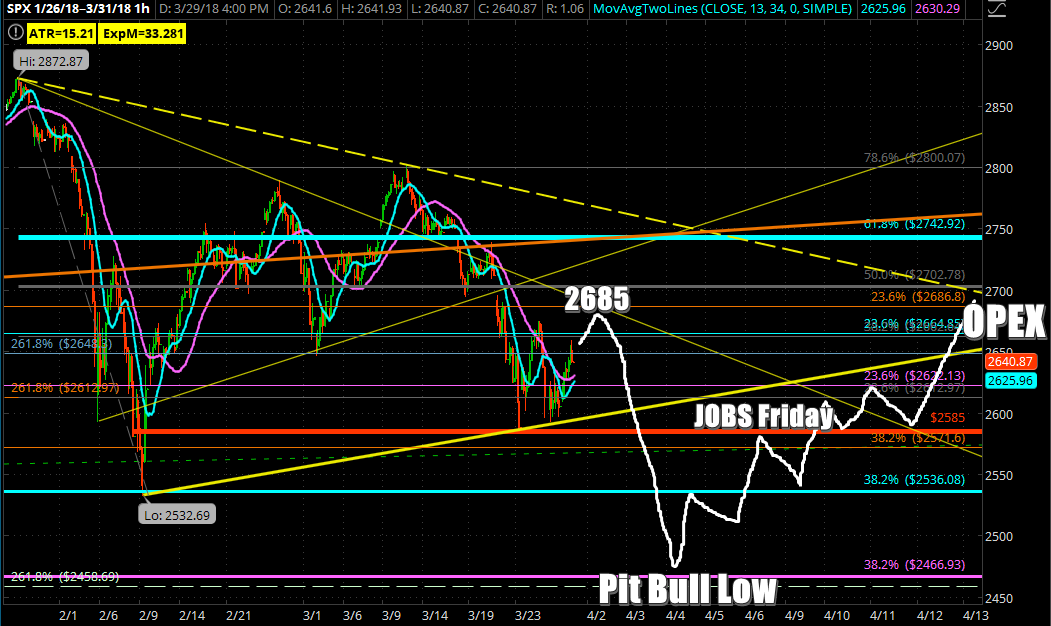 Should this play out, a massive “WTF JUST HAPPENED” sentiment will overcome the global markets (as they are all currently in the same Monthly, Weekly, Daily scenario) as MARGIN CALLS are issued left, right and center.

We just surpassed the MAR 27 2017 “mini correction” (-3.29% from MAR 1’s 2401) date which is also the 52Wk Low on a large number of stocks (almost all of the Cheatsheets) which will call for buyers’ algos to begin buying when either significant supply/demand lines are hit and/or the 38.2 retracement to the JAN/FEB 2016 LOWS are being tagged. 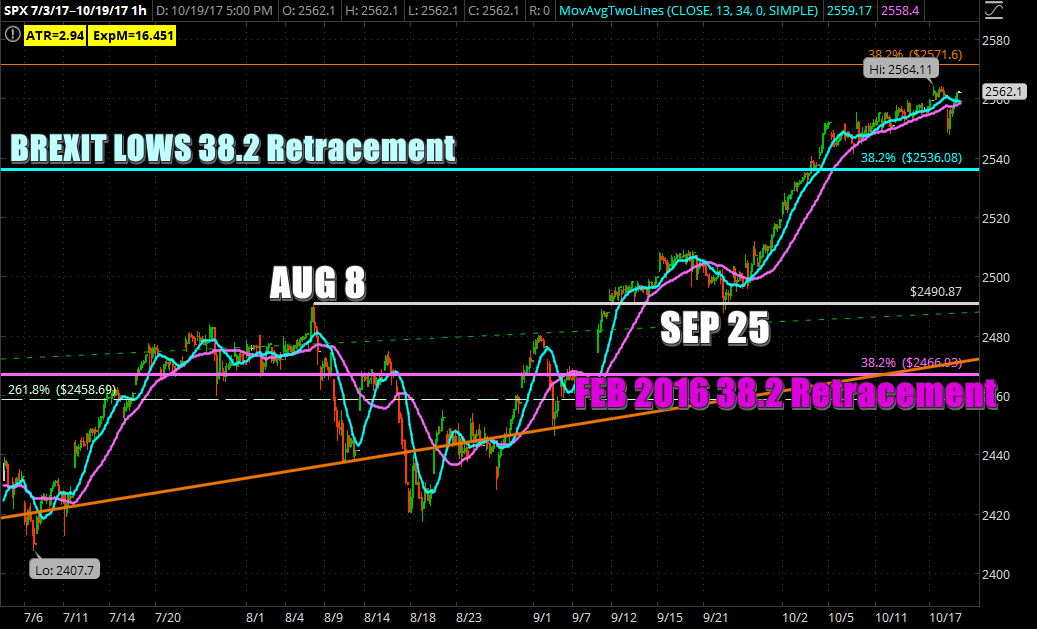 While this CORRECTION may not be over with, I still see this as MAJOR-4 with MAJOR-5 to come afterwards and retest/break above the ATHs and delay the Bear Market cycle from starting for another 6-12 months (give or take).

Most ALL what I been buying are CALLS for JAN 2019 using the ATH on the bigger names with a few random Q1 Tech earnings (NFLX & AMZN) and those JUN 2018 CALLS on C.

With how this all looks right now heading into this week Friday’s JOBS REPORT, it’s telling me to get SHORT @ SPX 2685 and SHORT AGAIN is 2585 breaks with the focal point 2491-2460.  This isn’t yet a SOLID STRATEGY with the 3 possible scenarios, but if SPX can get back upward to 2674 and/or 2695 this week, the market is going to need to show SIGNIFICANT SIGNS OF IMPROVEMENT on multiple indicators and individual stocks to not BLINDLY GET SHORT up at those levels for a pull back to 2622 2605 as a minimum.

Virtually every stock & ETF out there bottomed on 3 significant dates in 2016:

How you find it when you chart is simple: 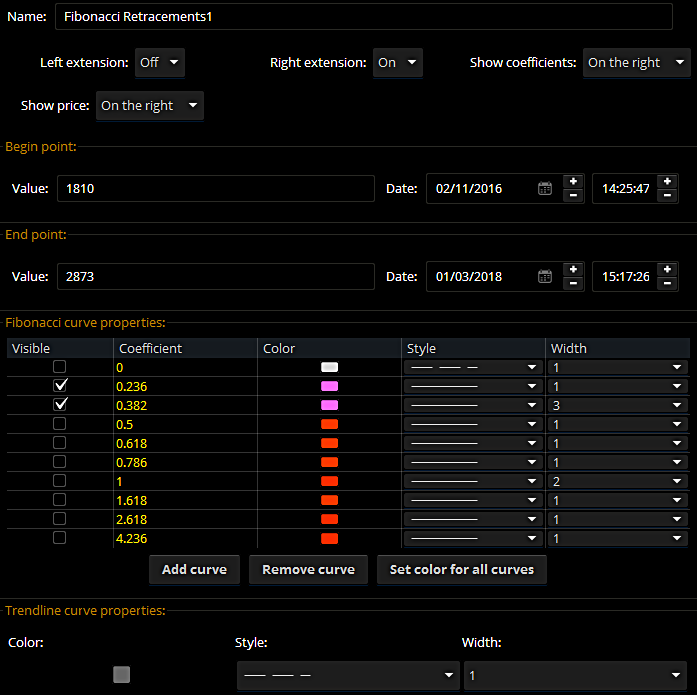