November will go down as one of the no dip months thanks to “NOT QE4” and “China REALLY wants to make a deal” as we closed off lowered guidance Q3 earnings beat/in-line reports and produced new ATHs on familiar names like AAPL, MSFT (the two which combined are higher market cap than the entire German DAX and also the Russell 2000), JPM, TGT, LULU, GOOGL, WMT and some new 2yr/10yr Highs on names like JD, BAC and even AMD.

All in all:   +103.54 for the month (High/Low) with a “no dip” dip of  -1.16% from the ATH the week after OPEX (that 3091 NOV 20) with each upside pivot since mid OCT accomplished each week for the TOP of that week while filling each of the 2 overnight gaps above during the month and using a stair case of consistent support – typically right on the 5day moving average – for each “no dip” along the way by NOT OVERLAPPING ANY PREVIOUS WEEK’S LOW: 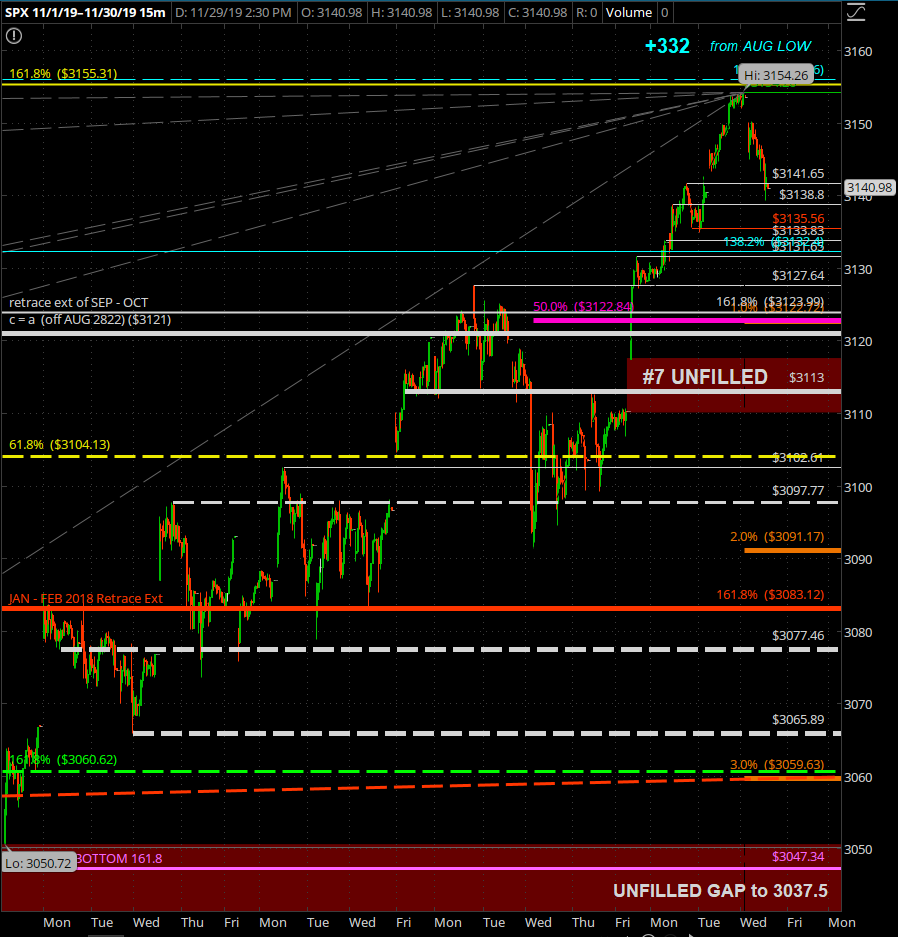 Actually,  the Weekly RSI(5) has been embedded OVERBOUGHT (above 70) since “Not QE4” began which a) created those unfilled gaps back from 2893 and b) only dipped when we had our little -1.16% drop over 2 sessions (NOV 19 & 20) which, as you may recall from chat, OVERSOLD US on smaller time frames for the bounce and nearly cut the Weekly & Daily in half (low 50s on RSI reading) due to the lack of energy this +261.60p move off the OCT 8 LOW (2893) right around when the FED began supporting the market: 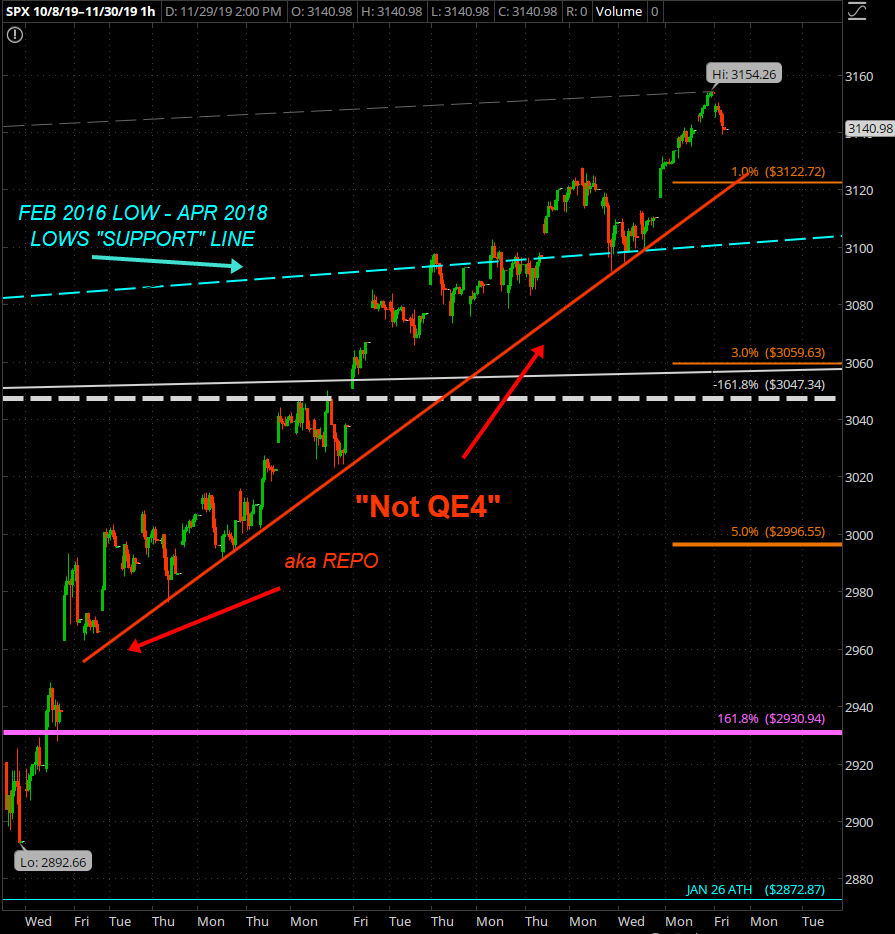 In the movie “The BIG Short”, the best line (for me) is that there above when Brownfield Fund is getting pressured due to the length of time the fraud ran back in 2005-2007 of the junk mortgage bond collapse which initiated the bank bailout and what we know today as QE.   It was into that 2007 top me and my 3 partners closed our hedge fund while living/working from Spain, but it wasn’t SOLELY because of the blatant fraud, but because the market has a memory (which is why my pivots work so well for all you swinging) 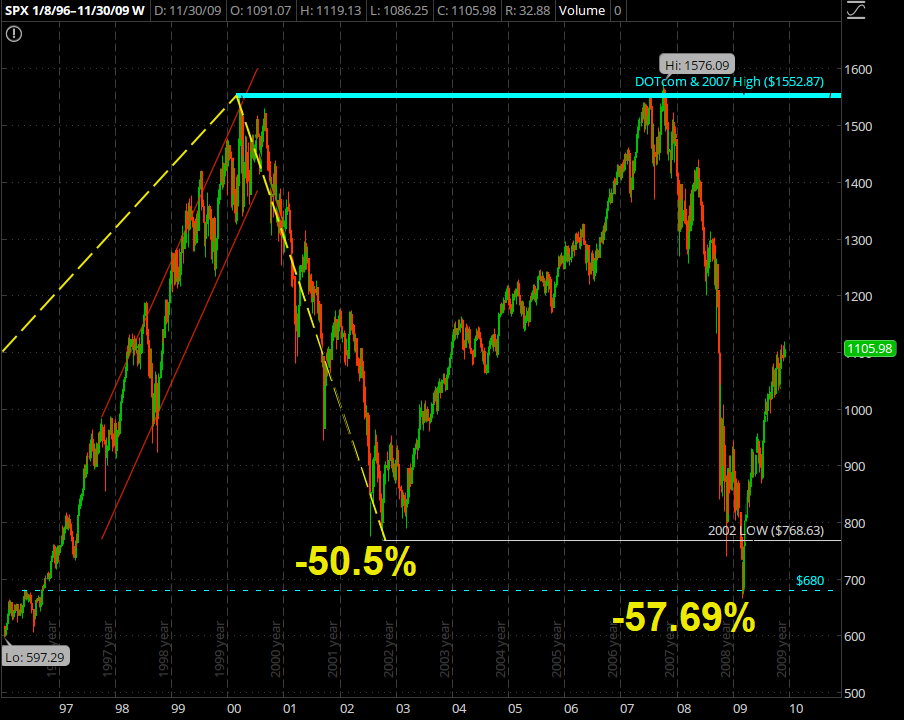 For those who never had the chance to be excited when Windows 95 was released, you can’t KNOW what this is all about, but instead view it as what it is:  A MEMORIZED CHART.

Besides the Y2K BUG scare, the markets were DOTcom proud in a booming consumer economy which had just come out of +15% mortgage rates to 7-8% and a Pablo Escobarian thrush of lavishness where 28.8k AOL.com connecting and 5 1/4 inch floppys disappeared and $30/week spent @ Blockbuster Video was “typical”

It was MARCH 2000 when BONDS peaked and a surge out of them into the end of Q1 2000 started the drop (along with the unknown of whom would become the President in the NOV 2000 elections).   It wasn’t until the pre-election failure to take out the DOTcom high in SEP 2000 when the drop truly began which, as you can calculate, declined -50.5% over a 30 month period (which included 9/11)

The OVERSOLD BOUNCE produced the “muscle memory” by which SPX rebounded over that exactly 5 year span to re-tag the DOTcom high, drop off it and get the 1st of 8 interest rate cuts to try and stop people from looking for FRAUD in the bond market which produced that DOUBLE TOP and then the DOUBLE BOTTOM /  CLOSURE from where it all began @ 680 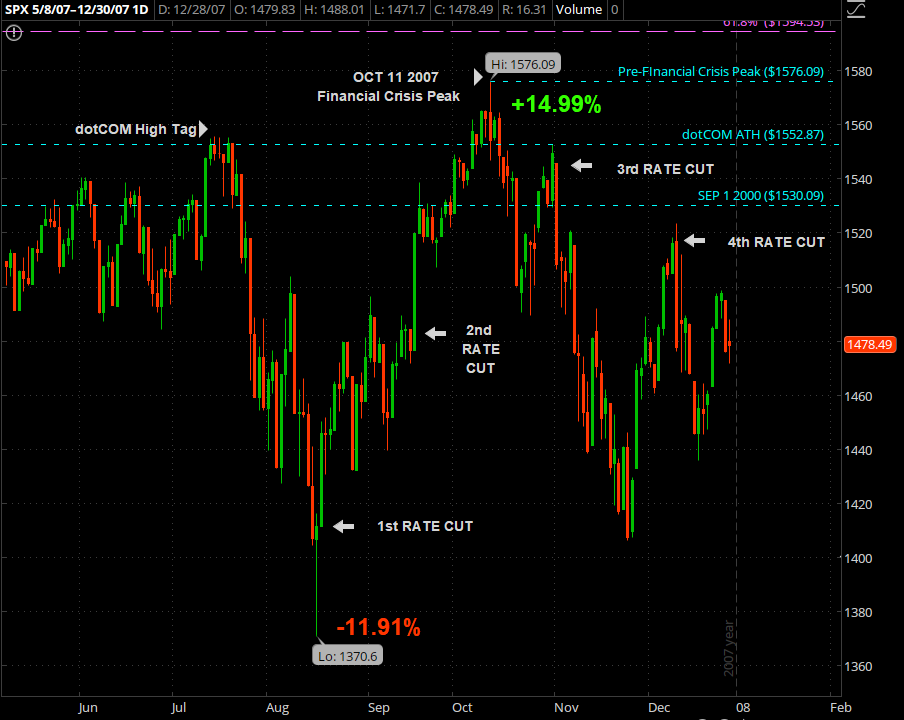 Sounds a bit “obtuse” to think this, but perhaps you heard the expression:

Baby boomers got the DOTcom dropped on them and then the 2007 mortgage fraud.  Think they are getting caught a 3rd time when 2 + 2 = 🐟?   That’s if you assume their collective holdings is part of that less than 10% of all equities owned which are held by Americans.

This is MY focus (a -50% drop) and all I needed was to see SPX 3047.34 accomplished for it to be, but it comes with some quite clear disclaimers:   ARE WE IN/COMPLETING MAJOR 3 of Primary V? 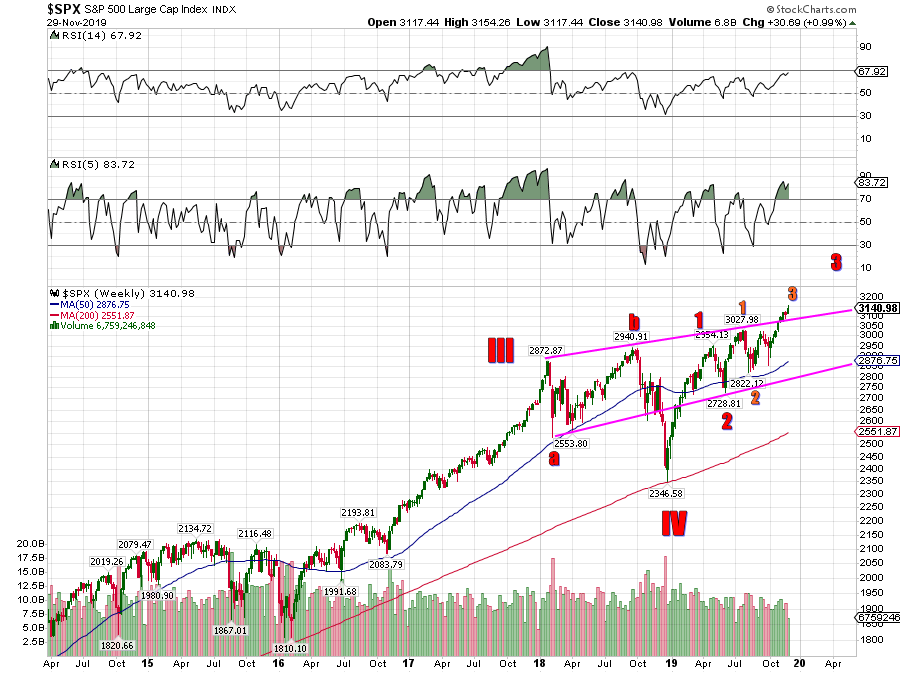 STOP…….  NOTHING MATTERS UNTIL WE WALK DOWN THE SPX STAIRS: 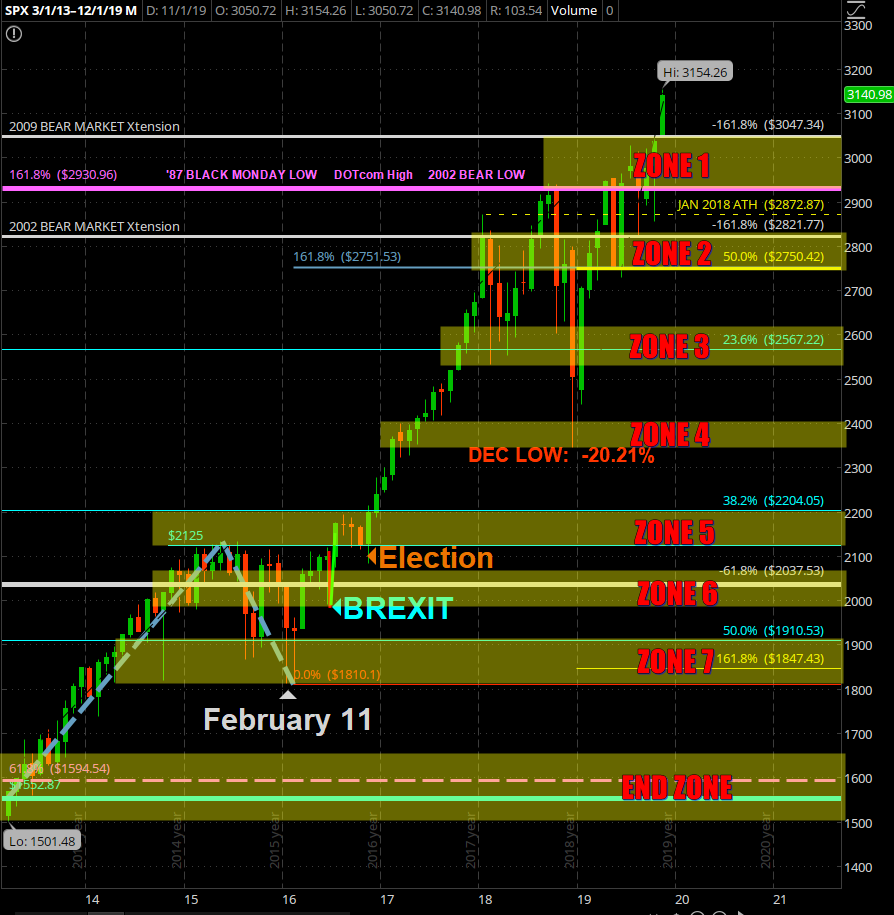 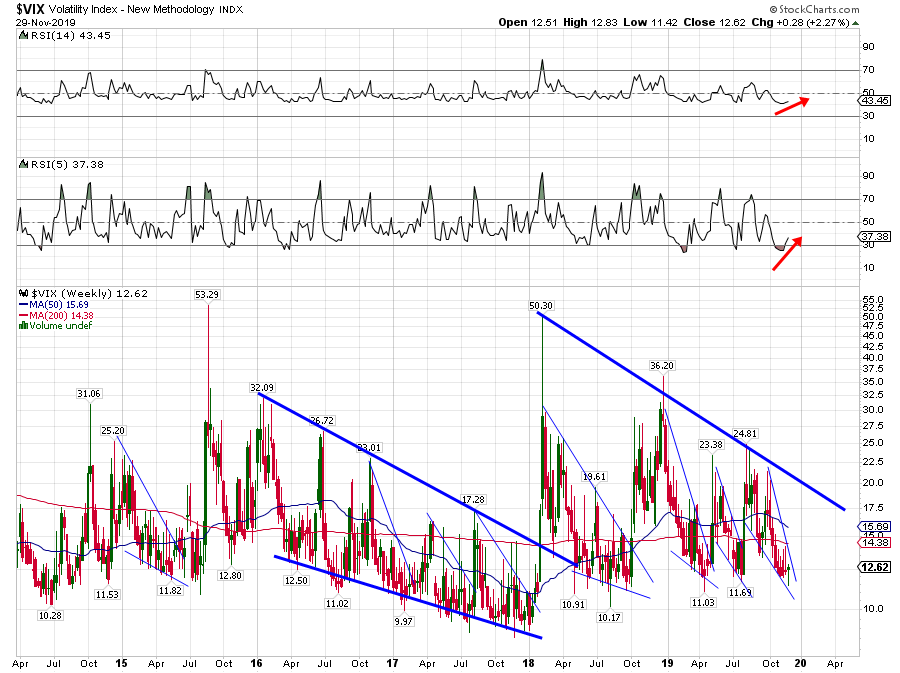 Upside has been forced for weeks (essentially all of NOV) and Wave 4 of MAJOR 3 of PRIMARY V should prove it is truly MAJOR 3 due to accomplish the final 5th wave targeting +3336 AS LONG AS 3091 DOES NOT BREAK.

Some BEAR WHALES were spotted WED & FRI with some large out-of-the-money DEC 6 SPX & DEC 20 SPY PUTS so those who have the opportunity to be “up only” brainwashed need to let the OVERSOLD Daily come and provide you the entry if you want peace and tranquility.

Common sense says sellers want to book gains in tax year 2020 rather than to book them in tax year 2019, thus a delay of any true downward momentum could be constricted based on this.   However, The same catalysts for a sell off remain as they have for over 1-month and, with divergences or not, are just unused – until they are.

A ~dip as such would also be a) in-line with the smaller dips since the JUN 3 LOW (-225p) with the AUG LOW -206p and then the OCT LOW -166p, and b) would summon in the support of the 50d MA (currently just under 3030).   With 3 full weeks left in the year and which includes 2 celestial dates, one of which is OPEX FRIDAY DEC 20 and we have Friday the 13th in between with this week the JOBS report, how oversold we get matters heading into Xmas.

BEAR CALLS (Why they are AWESOME)

I have +45 stocks/indicies/ETFs on my screens so when you want an idea, just ask.