AJBI  0.21 – You’ve likely watched an episode of Miami Ink at some point.  Well, Ami James, the lead of that studio, now has his own publicly traded ticker, AJBI.

AJBI just took it’s first real step yesterday in being traded despite some volume which dates back to the middle of May as low as .15.  The concept of the business model, Ami James branded products, is “vanilla” in that it is due to include all categories of men’s and women’s fashions and accessories, footwear, children’s fashions, toys as well as numerous other categories such as restaurant franchising, sporting goods, along with health and wellness accessories.

IMNP  0.33 – The “Death Drop” on this Nasdaq listed biotech developing and commercializing targeted therapeutics for the treatment of inflammatory diseases and cancer finally bounced on Tuesday.  News was not a catalyst, nor were any filings, yet the volume traded, 2.76M, was more than 10X the average daily volume (258.6K) which sparked up a bounce worth 57%.

They are working on Phase 2 clinical trials for bertilimumab, a first-in-class, fully human IgG4 monoclonal antibody, for the treatment of inflammatory bowel disease and skin disorders, but with the likelihood of a return to their year long trend, flip wisely or be stained with some smelly rashes of baggage.  Best possible entry at this point:  0.20

LFAP  0.052 – Two and half days of running off of a filing which claims the exclusive right to purchase medical device company FemCap Inc. which “provides” innovative FDA approved contraceptive and feminine hygiene medical device products, LFAP is the only OTC runner on the market and the kool aid is overflowing at this point.

The agreement calls for (1) $2.0 million upfront on the closing date for the transaction and (2) 1,000,000 restricted LFAP shares for a 5% royalty on gross sales revenue from the sales of FemCap™ and FemmyCycle® products for a period of five years from the closing date.  Well, LFAP doesn’t have $2.0 million dollars anywhere except within the 15,000,000 non-statutory stock options from their 2012 Equity Incentive Plan which the company granted to four persons connected within the company at an exercise price of .0026.  These same four persons owned half, 10,051,024 shares, of the last reported issued and outstanding shares.

Best possible entry at this point: As close to .02 as possible  Flip accordingly

QURE  13.54 – Alerted premarket via Twitter and Chat for the possibility of a massive upside move ahead of their June 13 conference call, QURE shares not only performed well during the regular trading session by adding $1.54 from the open, but they jumped to 14.20 after hours making the gains on the session worth $2.20 or 18.3%.  In September, QURE reported positive topline results in all four patients of one-year follow-up data from a Phase I/II clinical trial conducted by Institut Pasteur and shares shot up to the 52 Wk Hi 36.38.  The next report due out is data from its Phase I/II trial of AMT-060 in hemophilia B which is to be presented on June 11, 2016 at the 21st Congress of the European Hematology Association (“EHA”) in Copenhagen, Denmark with a conference call to follow on June 13.

Based on the 90 Day chart, you can see how 14.89 shall be the next resistance point which could easily be tested today.  Afterwards, 15.60 is the next line to be tested before embarking on “blue skies” which could ultimately retest that 19 level at or prior to the June 11-13 events.

SPY pulled a fast one yesterday when the movement to the upside was just enough to keep the bears at bay until 10:30 appeared on the clock and the first of four BEAR FLAGS presented great short-term PUTS plays to the point where SPY double-bottomed off of the intraday support line created last week Wednesday.  Because of the drop and immaculate recovery into the close during the last hour of trading before closing down on the 209.70 rejection line which came into play on Friday, we have a possible “Head & Shoulders” forming here on the smaller time frame charts.

Conversely, we have a potential Cup/Handle forming on the larger time framed charts, but still have that April 20 210.94 Hi as a massive resistance area.  Essentially, what we have here are two formidable factors which each indicate PUTS to be in play:  1) where the right shoulder forms on the smaller time frame charts and 2) one where, as I mentioned in yesterday’s tweet, has that April 20 Hi test range as an entry time for PUTS.  Both formations are still underdeveloped, so how they play out today will be the trigger point for the course of action to take.

We also have to factor in that bearish engulfing candle that hit seconds before the closing bell which leads many to believe we’ve seen the top for this week.  Asia contradicted that sentiment somewhat when S&P Futures topped at 2099.25 late last night while Europe has been less volatile than usual ahead of tomorrow’s big EU interest rate decision to be followed by ECB President Draghi speaking an hour before Thursday’s US market open.

Add in that we have the results of the currently ongoing OPEC meeting and Initial Jobless Claims on Thursday premarket and you can start smelling honey like any good BEAR might.  Crude Oil Inventories, which normally come out today at 10:30, are due out tomorrow at 11AM which could be the last little pop for that shoulder to form and we head south into next week.

OPEC & Oil Inventories & blah blah.  But seriously, Marathon Oil had a swarm of BULLS head into June 17 $16 CALLS @ the ask yesterday.  30,480 contracts were bought up and from the looks of the chart, 16 is the top of the channel MRO has been on since the bottoming out of crude oil, but that 13.70 area cross above the declining resistance line pushed it back on the last tests back on April 20 and last week.  The unusual volume does trigger some curiosity as to why no hedging with PUTS was noticeable, which makes for a possible play 2 weeks out that should be looked at closely.

Alerted yesterday, massive volume went into the August 19 $5 CALLS, 37,450, making it the Highest Volume Stock Option of the session yesterday. 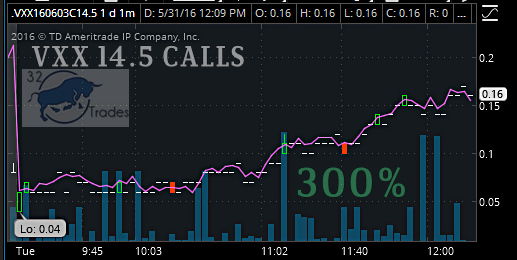